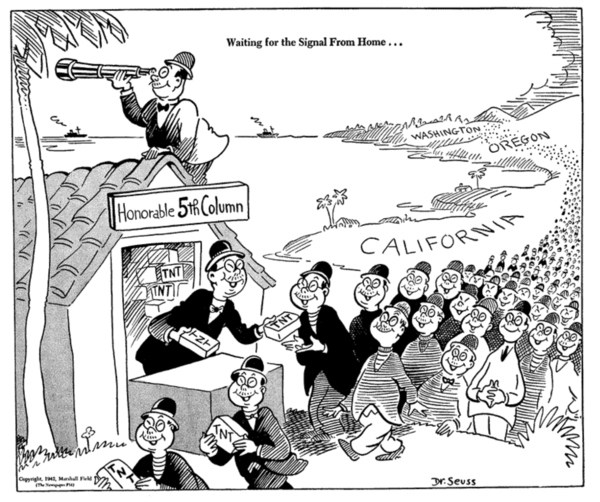 In today’s climate of war fever and paranoia, Francis MacDonnell’s Insidious Foes: The Axis Fifth Column and the American Home Front ought to be essential reading for any well-meaning person who wants to prevent the errors of the past. For all comparisons between Hitler and Putin, the domestic climate of fear is a closer analog to the late 1930s than to the ambiguous state of Russian forces that invaded Ukraine. Similarly, the domestic costs of confrontation with Russia will have a far more significant impact upon the lives and livelihoods of Americans than whatever resolution might tragically befall the people of Ukraine.

Temperamentally, I am the sort of historian (if I may be so bold as to call myself one) who believes that history ought to, at best, be used as an instrument of caution, not a tool for action. In that vein, Insidious Foes has immense value. MacDonnell’s work explores America’s domestic worries about an Axis “fifth column” from 1938 to 1942. While not baseless, MacDonnell argues that these worries were exacerbated by government and media forces into a kind of moral panic. MacDonnell asserts, “[t]he Axis Fifth Column scare thus fits into a historical pattern of national hysteria (p.4).”

While MacDonnell doesn’t discount the presence Nazi sympathizers on American shores, or real Nazi agents, he argues that these threats were marginal. While demagogues like Father Caughlin or American Bund inspired individual acts of violence, they “never posed any real threat to the republic (p.47).” He further asserts that “[t]hroughout the Great Depression Americans demonstrated antipathy toward both right-wing and left-wing radicalism.” And as for actual Nazi agents, plots hatched by German intelligence were woefully inept and quickly foiled. Despite these realities, the domestic threat of fascism was seized upon by the government and mass media for their ends. This distance between image and reality ought to serve as a warning in this time of foreign war, as both the government and the corporate press are interested in amplifying Putin’s threat abroad and at home.

And if you’re still with me thus far and yet have a hard time accepting the validity of these arguments because your politics may not align with mine, let me appeal to your egalitarianism and your self-interest. MacDonnell illustrates that tragedy of Japanese internment was made possible by the fear of domestic fascism, a fear stoaked by government and media. MacDonnell asserts, “the panic’s intensity greatly agitated the public and made possible the tragedy of internment (p.90).” Is it likely that Russian nationals and Americans of Russian descent will be rounded up and thrown in camps in 2022? No. However, Russophobia exists and, I would even argue, is tolerated in this climate. Are we really that much more advanced than the Americans of the late-1930s? We can be better than these base instincts if we allow history to serve as a warning.

And now, for your self-interest. MacDonnell argues the domestic fear of fascism and resulting victory over Hitler accelerated the “creation of a powerful intelligence establishment at home (p.9).” The fear surrounding the fascist threat helped to solidify the national security state and was subsequently and concurrently against dissentients on the left. The “Brown Scare” of the late 1930s helped birth the “Red Scare” of the 1950s. Whatever happens in Europe, you can bet the farm that some unscrupulous actors here at home will want to use the threat of Putin to expand the national security state.

Perhaps that might even sound appealing! But remember that these powers can be turned against you and the political causes you support. And, if history is any guide, it will be.

The folks at The Strategy Bridge were nice enough to reach out to me for a review of Craig Whitlock’s The Afghanistan Papers: A Secret History of the War. The review went live this morning. For anyone interested in a quick history of the war, I high recommend it…but first, read my review: